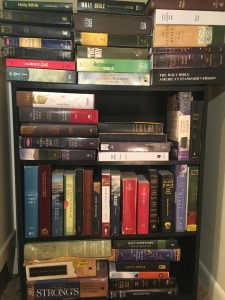 Isaiah 55:11 ESV so shall my word be that goes out from my mouth; it shall not return to me empty, but it shall accomplish that which I purpose, and shall succeed in the thing for which I sent it.

2 Timothy 3:16-17 ESV All Scripture is breathed out by God. And profitable for teaching, for reproof, for correction, and for training in righteousness,

that the man of God may be complete, equipped for every good work.

2 Peter 1:19-21 ESV And we have the prophetic word more fully confirmed, to which you will do well to pay attention as to a lamp shinning in a dark place, until the day dawns and the morning star rises in your hearts,

knowing this first of all, that no prophecy of Scripture comes from someone’s own interpretation.

For no prophecy was ever produced by the will of man, but men spoke from God as the were carried along by the Holy Spirit.

Job 38:1-2 ESV Then the LORD answered Job out of the whirlwind and said:

“Who is this that darkens counsel by words without knowledge?

Job 40:6-7 ESV Then the LORD answered Job out of the whirlwind and said:

“Dress for action like a man; I will question you, and you make it known to me.

I had heard of you by the hearing of the ear, but now my eye sees you;

therefore I despise myself, and repent in dust and ashes.’

After the LORD had spoken these words to Job, the LORD said to Eliphaz the Temanite; “My anger burns against you and against your two friends, for you have not spoken of me what is right, as my servant Job has.

And how are they to preach unless they are sent? As it is written, “How beautiful are the feet of those who preach the good news !”

But they have not all obeyed the gospel. For Isaiah says, “Lord, who has believed what he has heard from us?

So faith comes from hearing, and hearing through the word of Christ.

Acts 26:17-18 ESV delivering you from your people and from the Gentiles–to whom I am sending you

to open their eyes, so that they may turn from darkness to light and from the power of Satan to God, that they receive forgiveness of sins and a place among those who are sanctified by faith in me.’

Romans 15:4-7 ESV For whatever was written in former days was written for our instruction, that through endurance and through the encouragement of the Scriptures we might have hope.

May the God of endurance and encouragement grant you to live in such harmony with one another, in accord with Christ Jesus,

that together you may with one voice glorify the God and Father of our Lord Jesus Christ.

Therefore welcome one another as Christ has welcomed you, for the glory of God.

The Fall of Israel

2 Kings 17:6-20 In the ninth year of Hoshea, the king of Assyria captured Samaria, and he carried the Israelites away to Assyria and placed them in Halah, and on the Habor, the river of Gozan, and in the cities of the Medes.

Exile Because of Idolatry

And this occurred because the people of Israel had sinned against the LORD their God, who had brought them out of the land of Egypt from under the the hand of Pharaoh king of Egypt, and had feared other gods

And the people of Israel did secretly against the LORD their God things that were not right. They built for themselves high places in all their towns, from watchtower to fortified city.

They set up for themselves pillars and Asherim on every high hill and under every green tree,

and there they made offerings on all the high places, as the nations did whom the LORD carried away before them. And they did wicked things, provoking the LORD to anger,

and they served idols, of which the LORD had said to them, “You shall not do this.”

Yet the LORD warned Israel and Judah by every prophet and every seer, saying, “Turn from your evil ways and keep my commandments and my statues, in accordance with all the Law that I commanded your fathers, and that I sent to you by my servants the prophets.”

But they would not listen, but were stubborn, as their fathers had been, who did not believe in the LORD their God.

They despised his statues and his covenant that he made with their fathers and the warnings that he gave them. They went after false idols and became false, and they followed the nations that were around them, concerning whom the LORD had commanded them that they should not do like them.

And the abandoned all the commandments of the LORD their God, and made for themselves metal images of two calves; and they made an Asherah and worshipped all the host of heaven and served Baal.

And they burned their sons and their daughters as offerings and used divination and omens and sold themselves to do evil in the sight of the LORD, provoking him to anger.

Therefore the LORD was very angry with Israel and removed them out of his sight. None was left but the tribe of Judah only.

Judah also did not keep the commandments of the LORD their God, but walked in the customs that Israel had introduced.

And the LORD rejected all the descendants of Israel and afflicted them and gave them into the hand of plunders, until he had cast them out of his sight.